On July 20, 1969, at 20:17 UTC, the meteor shower was the only moon to receive human arrival. The Apollo 11 spacecraft carrying three astronauts Neil Armstrong, Bose Aldrin and Michael Collins landed on the moon. Six hours and 39 minutes later, Neil Armstrong became the first person to set foot on the moon. It was broadcast live on television around the world with the phrase “This is a small step for man, but a giant leap for mankind.”

This lunar voyage was presided over by the 35th President of the United States, John F. Kennedy. To achieve the national goal set by Kennedy, it is part of the Third Human Space Program (Operation Apollo) led by the U.S. National Space Administration (NASA). “Before the end of this decade, a man will be sent to the moon and brought back to Earth,” Kennedy promised.

The Apollo program sent 32 astronauts to the moon from five other space missions, which lasted until December 1972. 12 of them set foot on the moon. Charles “Pete” Conrad Kanish, Richard F. Gordon Kanish and Alan L. Bean is one of the three. They landed on the moon for the second time on April 14, 1969, with the 12th Apollo mission.

Then, in March 1970, the three of them had the opportunity to set foot in Sri Lanka (then Sri Lanka). It is another special stop on a tour of 20 countries celebrating the joy of returning to the moon. 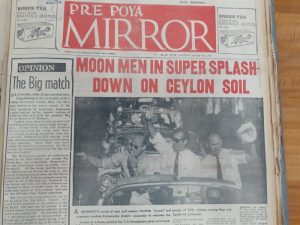 On March 13, 1970, Conrad Kanish, Gordon Kanish, and Bean and their wives landed in Sri Lanka from Katunayake Airport on a plane used by the President of the United States. Minister of State R. Jayewardene, US Ambassador Andrew Corey, Colombo Mayor Vincent Perera and others.

Ceylon Daily News editor Primil Ratnayake reports that one of the astronauts who had fun was Bean “Hi!” When he gets off the plane. He raised his hands to greet the people and responded.

“This is a historic moment in Sri Lanka. Seeing the heroes setting foot on the moon is a special moment in our lives. R. Ceylon Daily Mirror reports.

As the astronauts arrived in Colombo on a motorcycle from the airport, people gathered on both sides of the road and hoisted American flags, “Jaya Sri!” He greeted them. The procession stopped at several places, one of which was a public display at the Sugathdasa Stadium. A lunar spacecraft made of coconut shells was on display. 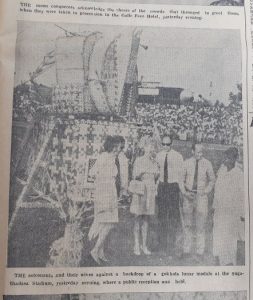 The astronauts and their wives arrived at the Galle Face Hotel where they were staying. “I remember a Cadillac motorcycle hitting the road near the garage. The road was full of people on both sides. Everyone cheered. It was a great sight, ”said Lalith Rodrigo, the hotel’s new director at the time.

This is not the first time I have seen Sri Lanka

The astronauts went to the Queen’s Palace (now the Presidential Palace) to meet Governor William Gopala, and then to the Temple Trees to meet Prime Minister Dudley Senanayake and several other political politicians who later made it his official residence. Lanka Daily News reports that the Minister of Social Services Ashoka Karunaratne welcomed the astronauts to ‘Surya Deshaya’ and inquired about the moon. “But deadly,” replied the bean. Conrad Kanishr. Pointing out that this was not the first time he had seen Sri Lanka, he said, “I saw this island from space during Operation Gemini 5. It was the most beautiful view I had ever seen on that trip.

On this occasion, the astronauts did not forget to give a wonderful gift to Sri Lanka. They are four pieces of moon dust collected during the previous Apollo 11 mission. Each portion weighs about 0.05 mg. The gift from US President Richard Nixon is still preserved at the National Museum of Natural History in Colombo. But, you can only watch it on special occasions.

The astronauts’ visit to Sri Lanka lasted for three days. There they also went to Kandy.

The astronauts and their wives visited the Royal Botanic Gardens in Peredenia on March 14 and planted Bursonima chrysifolia as a memorial plant. Then we went to the Tooth Relic and offered flowers to the relics house. 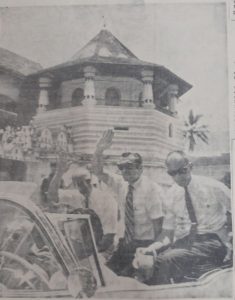 What do you think about Sri Lanka?

“What we have seen so far in Sri Lanka is great. These trees and vegetables are lush and green. So are the people, ”Bean told the Daily Mirror. Anyone can be happy in this environment. How beautiful these mountains and valleys are when you look down on them! ”

Meanwhile, Conrad Kanish described his experience, “I think we got the best recognition in the world from Sri Lanka. That fact must be taken into account.” He said he would appreciate it. He has been in Sri Lanka for at least a month. “Look at the country you love! We will all never forget this experience.

Sir Arthur c. Wright, a British science fiction writer, inspired the hearts of people involved in space exploration. At Clark’s request, the astronauts’ flight was extended for another day. He removed all obstacles such as journalists and the public and gave the astronauts the opportunity to enjoy the comforts of the Trincomalee beach. 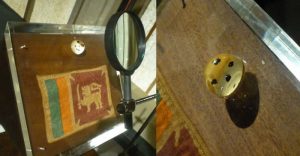 Arthur c. In his autobiography, Clark writes about his experience traveling to Trincomalee. He handed Bean an underwater camera and said, “Allen, don’t look at the sun.” The reason is that during the lunar journey, when Bean accidentally pointed the camera lens at the sun, that expensive camera was destroyed and the live television broadcast also stopped. But Clark says Bean doesn’t like jokes: “He didn’t laugh about it, but they really enjoyed the diving experience.”

The astronauts arrived in Colombo by air from Trincomalee. They then embarked on a world tour to Rangoon in Burma (present-day Myanmar).

Although the ‘space race’ between the Soviet Union and the United States began with rivalries and conflicts, it brought many victories that the world will never forget. “People around the world can reach this milestone in human history,” President Nixon told astronauts returning by phone from the White House. 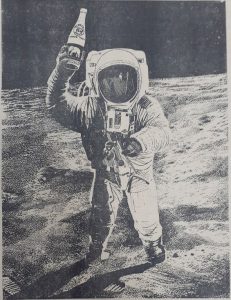 In his farewell address, JPR de Ceylon Daily News reports that Jayawardene thanked the United States and the three astronauts for “giving our people, especially young people, an opportunity to increase their interest in this” as well as their visit to Sri Lanka.

Why not go to the moon now?

These achievements marked the beginning of the space age and, despite the hopes and feelings of the people of the world, NASA had to end the program due to the gradual decline in interest and money. The last mission to the Moon was the 1972 Apollo 17 mission, the longest spacewalk on the Moon’s surface in history, as well as its longest orbital time (74 hours, 56 minutes, 38 seconds).

Not only did the space benefits of the moon, the lack of benefits, and the end of the Cold War mark the end of these space programs, but with the Columbia spacecraft explosion in 2003 and the loss of seven lives, astronauts and all agencies, including NASA, were minimizing their projects. Was interested in referring.

However, with the advent of the 20th century, people have the opportunity to expand their imagination. Space projects have led to innovations in the fields of defense, technology, medicine, geology, archeology and oceanography. Artificial limbs, solar panels, fire extinguishers, wireless equipment, water filters, etc. came into the world as a result of space exploration research.

Read more: 5 amazing things that came into the world because of NASA

South Asia is also now focusing on space exploration, with the Indian Space Research Organization (ISRO) launching its first satellite in 1975, with the support of the Soviet Union, called the Aryabhata. They were later able to build more spacecraft and recently sent Moon-2 to explore the Moon’s South Polar region. Available not only in India but also in Sri Lanka. The Clark Institute for Advanced Technology (ACCIMT) and the Japanese Space Agency (JAXA) launched our first satellite, Ravana-1, in 2019 and joined the ranks of space enthusiasts.

In 1970, J.W. R. As he said in his farewell speech, “Future generations will add value to the hard work of other members of the space program today, including Conrad, Bean and Gordon.”