The Singapore ship Express Pearl caught fire on May 19 about 18 km from the Port of Colombo. That was while coming to the port of Colombo from India. The ship was carrying about 1,486 TEU containers (20-foot-long containers) and was transporting 25 metric tons of other chemicals, including nitric acid. The ship was already completely destroyed by fire. 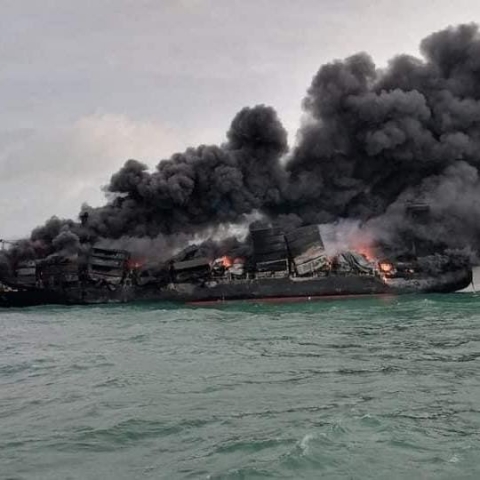 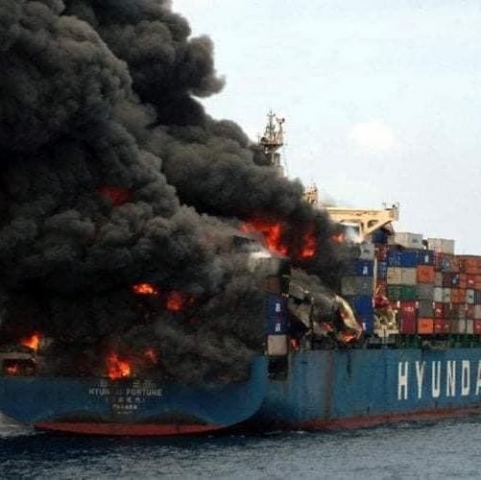 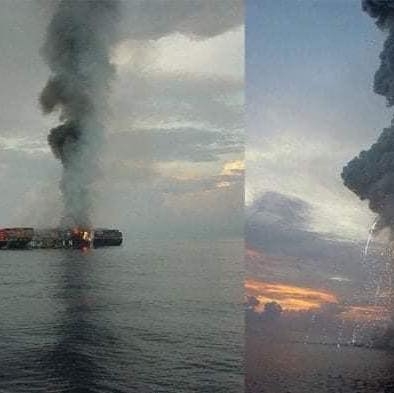 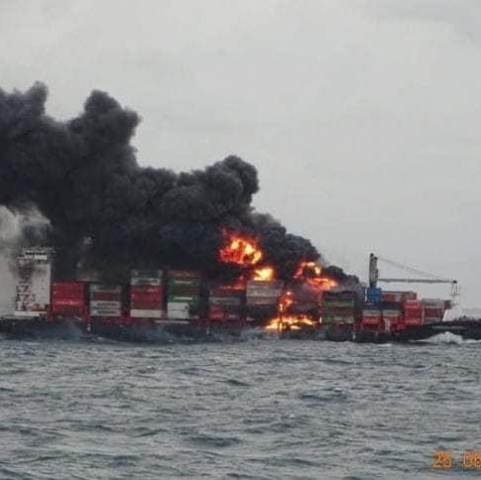 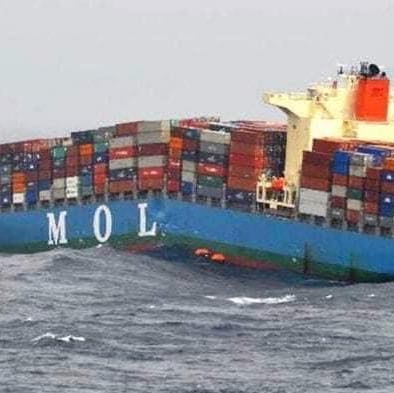 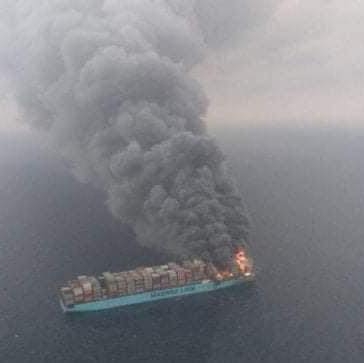 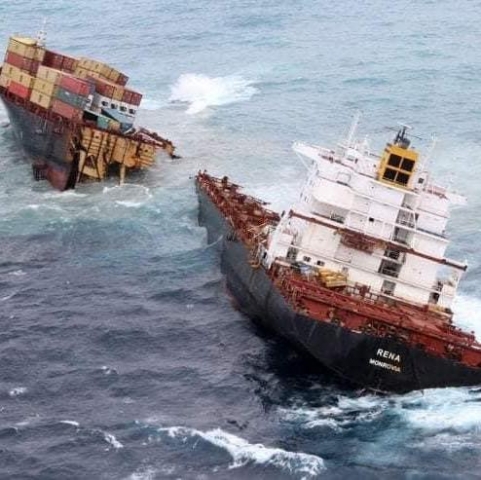 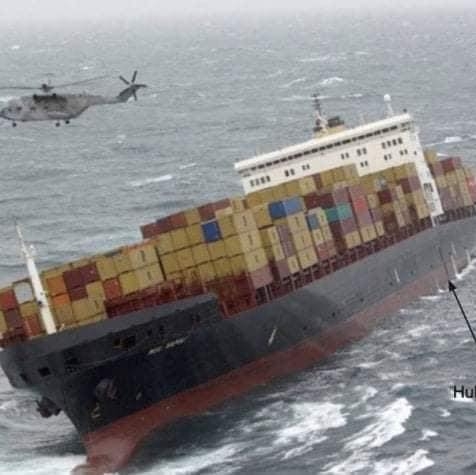 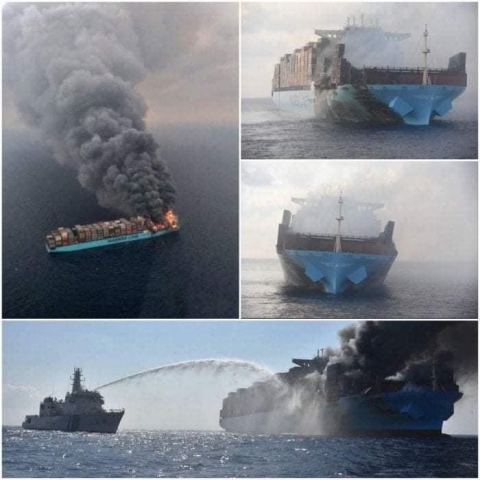 The Hanjin Pennsylvania is a 281-meter-long Liberian-flagged cargo ship built in South Korea. It was a TEU – Twenty foot Equivalent Unit with a capacity of about 4300 and was sailing in the Indian Ocean on November 11, 2002, 150 km off the coast of Dondra in Sri Lanka. Its destination was Europe. There was a sudden fire in the 4th section of the ship that morning and by that time there were 21 crew members on board. One member died of severe burns and another went missing. Many containers sank due to explosions caused by the fire. By November 12, the other crew members had abandoned the ship as the fire spread to the dangerous containers of the ship.

It took about 12 days to put out the fire and by November 25 the ship was ready to be towed to port. Subsequent investigations revealed that the fire was caused by a chemical called calcium hypochlorite in a container. It is reported that more than half of the ship’s containers were destroyed due to the fire and the material used to put out the fire. The ship’s control room and engine room were also completely destroyed. Property damage is estimated to exceed $ 100 million. The wreckage was purchased by a British shipping company after it was completely repaired at a dockyard in Shanghai, China.

The Hyundai Fortune was en route from Asia to Europe when it crashed on March 21, 2006 in the Gulf of Aden, about 100 km from Yemen. With a storage capacity of TEU Container 5551, the ship is owned by the State of Panama. The fire started with an explosion under the deck and then spread to the lower part of the ship. The explosions destroyed a large part of the hull and the water was leaking into the ship due to a 12 meter crack. About 60-90 containers sank due to the explosions, but all 28 crew members were able to survive with the help of a Dutch naval vessel.

The ship’s engine room was destroyed by fire and then completely submerged. The power outage on the ship destroyed food and medicine in refrigerated containers. The blaze lasted for several days, but it was reported that 2249 containers rescued were sent back to Europe. The cause of the fire, the researchers said, may have been the storage of petroleum-based washing liquid near the engine compartment of the vessel. However, the ship was wrecked at a cost of about $ 800 million and was said to be in use until 2018 after being repaired.

The 275-meter-long British ship MSC Napoli crashed while transporting goods from Belgium to Portugal. This is due to the severe weather conditions that occurred on January 18, 2007 in the English Channel. At that time 11 Beaufort units or 60 nautical miles were reported. The waves were about 10 meters high and eventually the ship’s hull ruptured. The cracks appeared on both sides of the ship’s control room, causing water to leak. At 10.30 am the Chief Technical Officer decided to deactivate the ship. The crew of 26 left the ship at 11.15 am after the wreckage of the ship was confirmed by a French Air Force helicopter.

Instead of being towed, the ship was allowed to sink along the waves and reach the shores of Brunskom, England. Of the 41,773 metric tons of containers loaded on board, 1684 metric tons are classified as hazardous materials designated by the International Maritime Organization. Rescue teams blew up the ship into three pieces and towed it apart to prevent it from sinking completely on July 7. 103 containers sank in the accident and the leaked oil had spread over an area of ​​8 km. It is said that it took 924 days to complete the rescue operation by clearing the sea and clearing the ocean area.

On October 5, 2011, M.V. The Greek ship MV Rena was traveling at a speed of about 30 miles [30 km] an hour and was stranded on the Astralabe coral reef off the coast of Plenty, New Zealand. The ship was stranded on a coral reef and was in danger of splitting due to the constant pressure exerted by the waves. On October 14, a large crack appeared in the center of its hull, causing the ship to tilt about 20 degrees, sinking 1368 of the 3350 containers.

On January 08, 2012, the ship split completely into two parts. The front part remained on the coral reef but the back part sank completely with the containers two days later. The front part was still about a meter below the water level of the coral reef, so 1007 containers were removed. It took another 07 months for this. About 300 of the 1,700 metric tons of oil stored on the ship had leaked, and rescue teams continued to clear the ocean water and recover the ship’s broken iron parts. Although 430 tons of such iron was able to be removed by helicopter, it is said that a large quantity is still in the deep sea.

It is reported that environmentalists hope to make observations here until around 2040. This is to check whether the coral reef is further damaged by this accident. This is said to be the largest environmental disaster in the New Zealand Sea.

The MOL Comfort is now known as the largest container ship accident in recent history. The ship was en route from Singapore to Saudi Arabia when it crashed on June 17, 2013 in the Indian Ocean, about 370 km from Yemen. At the time, the ship had about 4,380 containers, about 7040 TEU in size. Also, there were about 3000 tons of fuel in the ship. Due to the turbulence caused by the monsoon in the Indian Ocean region, the hull of the ship has been damaged and water has started leaking. The 26 crew members on board were flown to MOL by a German container ship. The Comfort was removed from the ship.

On June 24, tugboats arrived to tow the wrecked ship to a harbor, but the wreckage sank before rescue operations could begin. By June 26, the ship’s hull was hidden in the sea at 13,000 feet. As a result about 1700 containers floated in the sea. Although there was no oil spill, 1,500 metric tons of oil was stored in the hull of the ship. The front of the ship was being prepared for towing, but on July 6, a fire broke out. The fire was difficult to extinguish and 2400 containers were destroyed. Eventually, the front of the ship sank, and the latter sank about 9,800 feet [600 km] north, about 600 miles [600 km] north.

Almost all the containers loaded on the 316-meter-long MOL Comfort were sunk, and the company that insured the containers alone cost more than $ 400 million. Another $ 66 million was contracted for all of the ship’s mechanical equipment.

After this accident, the M.O.L. The strength of the hulls of the six sister ships of the Comfort (MOL Creation, MOL Charisma, MOL Celebration, MOL Courage, MOL Competence, MOL Commitment) were immediately investigated and the production company took steps to improve the hull strength of three of them.

The Maersk Honam is a 353 m long container ship owned by the Danish company Maersk Line. It was on its way from Singapore to Egypt on March 6, 2018 when it caught fire in the Arabian Sea, 1700 km southeast of Oman. At the time, the ship had 7860 containers (equivalent to 12,416 TEUs) and 27 crew members. The fire had started when the containers on the front of the ship caught fire. The crew used carbon dioxide and other fire extinguishers to contain the blaze, but the crew was forced to evacuate as the flames spread and the container exploded. Accordingly 23 persons left the ship but four persons were still missing. Of the 23 who left, several were seriously injured and one of them lost his life. It was later confirmed that the missing were also dead.

It took about a week to put out the fire, and subsequent tests concluded that the chemical in the containers was sodium dichloroisocyanurate dihydrate. It was said that 54 containers contained about 1000 tons of the chemical. During questioning, crew members said the damage was exacerbated by the failure to close the magnetic doors on time, a safety measure used on ships to prevent fires and spreads. It is said that this is due to the ringing of the normal alarm bell instead of the fire alarm bell.