If you were asked what year you missed the most in life, your answer would undoubtedly be 2020. But for all those who have little or no love for astronomy, the December skies have given beautiful hope. Hundreds of years later, the Christmas star appears in the sky in December 2020.

What is this Christmas star? Rumor has it that this is not really a star. A conjunction of planets. The two galactic giants of the Solar System, Jupiter and Saturn, which have been gradually approaching for months, will appear as close as 0.1  today, 21.12.2020. This is the most important asteroid combination of 2020 and can be seen by everyone around the world. All of you must read this article before watching this rare phenomenon in the sky tonight. 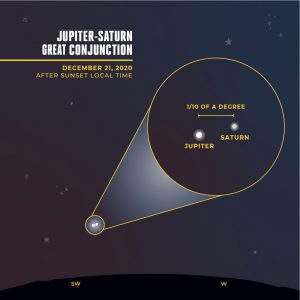 Are Jupiter and Saturn really close to each other?

No. Conjunction is not really the physical proximity of two planets. The location of two or more other planets in one straight line in the orbit of an observer from Earth is called a conjunction.

In fact, on this day, Jupiter is twice as far away from Earth as Saturn. Speaking of location, the 2020 winter solstice (Winter solstice – the shortest daylight for the Northern Hemisphere countries) is set to take place on December 21st.

However, Jupiter and Saturn are almost exactly in the line of sight of an observer from Earth, so what really happens today is that these two planets seem to be getting closer to each other. The accompanying diagrams make this point even clearer to you. A Jupiter-Saturn conjunction like this happens every 20 years. We call this phenomenon a great conjunction. The last great conjunction appeared on May 28, 2000.

But we were not able to watch this event that year. This is because the two planets are in orbit about 14.9 degrees west of the Sun. As a result, we did not see Jupiter and Saturn hidden in the sunlight. 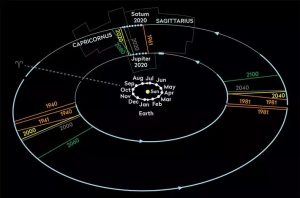 Why is the 2020 great conjunction so special?

This is unique for a number of reasons. Although these planets appear close every 20 years, this year Jupiter and Saturn appear as close as 0.1. The last time these two planets appeared so close was on July 16, 1623. But even on that day, the two planets could not be seen as close as 13 east of the sun. (The telescope had also been discovered by then, but there is no evidence that even Galileo observed it).

The last great combination to be observed was closer to March 4, 1226, than it is today. On February 19, 1961, the two planets were located 34.9 degrees west of the Sun, but not as close as they are today. This year’s Sisira Suriya Nivrithi is already happening and people around the world have a good background and time to observe this phenomenon. For all these reasons, this event is more important than a once-in-a-lifetime event.

How does a great conjunction occur?

Strictly speaking, Jupiter and Saturn are in this combination every 19.85 Earth years. It takes Jupiter 11.86 years to orbit the Sun in one round, and Saturn takes 29.4 years to pass through each other in the night sky every 19.85 years. In a ‘great combination’, we actually observe the slow-moving Saturn in the night sky beginning to be overtaken by the fast-moving planet Jupiter.

One of the two major combinations that occur continuously varies around 117 in the night sky and appears in the same place in the sky approximately every 800 years, depending on the orbital resonance of the planets. The same thing happened 796 years ago. This is the last time a ‘great combination’ has happened as easily as this December.

What is the best time to watch this conjunction?

The time between Jupiter and Saturn can be seen in at least 6 arts on Monday 21st December 2020 at 7 pm Sri Lanka time. So fortunately in Sri Lanka this opportunity is seen in the night sky. But at 7 p.m., the two planets are about 15 degrees above the western horizon.

So if you want to see this moment at the right time, you have to be in an area with clear skies to the horizon. However, as the sun sets, we can see this combination just about 25 miles southwest of the western horizon. These days, one can clearly identify the two planets by looking at the night sky.

How to monitor conjunction?

This “great combination” takes place only within the constellations of Capricorn, and the full moon is currently located above the southern sky. This effect is also known as the Double Planet Effect, as the two planets appear to be one and the same to the naked eye. However, a telescope can distinguish between the two planets.

Even a small telescope will suffice. Using a subnet with a magnification of about 50x, it is possible to distinguish between two planets within the same visible range. And Saturn’s rings can even look at Jupiter’s Galilean moons. If you want to photograph all this you need a 200mm lens. 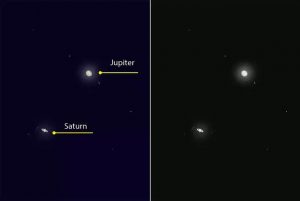 When can we expect this to happen again?

A reunion will take place in another 20 years. On a cosmic scale, it’s a very short time. The good news is that Jupiter and Saturn will again appear in the morning sky at a distance of 43.5 from the Sun, separated by about 6 arts. But the sad part is that this is going to be March 15,