The beautiful Ma Oya starts from the Dolosbej Mountains in the Kolochikad region and flows for 134 km. This canal which carries a large body of water to the sea falls from the hills through the Asupini waterfall in Aranayaka area. Situated at a height of about 100 feet, this waterfall attracts visitors.

There are two main ways to visit this beautiful waterfall. The first is from Colombo to Mawanella, from Mawanella town to Aranayaka, and from there through Horawela Diyanwala, cross the Dantalgoda on the Nattakanda Uduwella road and travel another mile and a half on the Uduwella-Nattakanda footpath to reach the falls. Then you can observe the waterfall falling from a height of about 100 feet. The other entrance to the waterfall is the road from Gampola town. Km from Gampola town to Cinnamon Garden town. From there you can reach Asupini Falls at a distance of about 2 km. A visitor to Asupini Falls can see the falls below. This is the path most people choose to travel. This is because a vehicle can travel near the falls.

Although Asupini Falls is a beautiful waterfall, about 15 deaths have been reported in the last few decades. The cause of death was the dangerous situation around the falls. There is a legend that the place called “Minikandawala” at the foot of the waterfall is a place where people kill. In addition, it is a well-known fact that many legends are woven around this beautiful waterfall. There are two legends about how Asupini Falls got its name. 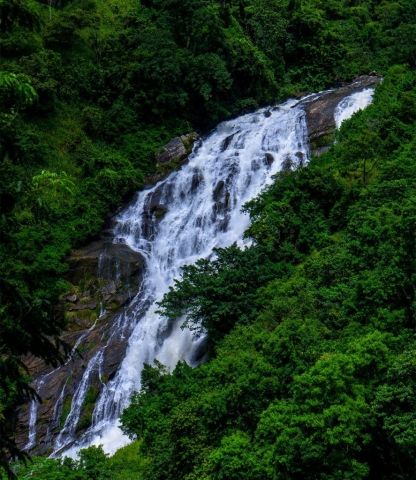 In 103 BC, King Walagamba became the ruler of the Anuradhapura Kingdom. Shortly after his peace began, a group of South Indian invaders invaded the kingdom of Anuradhapura. To save his life, King Walagamba fled to the forest and hid in various places. It is said that the king lived in several places around Kegalla. Kegale got its name from a story about King Walagamba.

According to legend, King Walagamba, who was hiding safely, once crossed a waterfall on horseback. This waterfall located in the Aranayaka area was crossed by the then king. Named ‘Asu Pani Ela’ due to the horse jumping across the waterfall, this waterfall later became Asupini Falls.

The Legend of Princess Thirty

A king kept thirty of his queens in a cave near Asupini Falls before going to war with the enemy. This cave is still known as ‘Tis Kumari Cave’. Before leaving the war, the king told his queens that he would send a messenger to inform them of the aftermath of the war. The king went to war, announcing that if he won the war, the angel would bring a white flag, and if he lost he would bring a black flag.

The battle was won, as the king had hoped. He appointed the flag-bearer of the village of Hathgampola to inform his queens of his victory. According to legend, the flag bearer who was drunk at the time mistakenly carried the black flag. There is also an opinion that the king who wanted to make fun of the queens ordered the flag bearer to carry a black flag. A few days after the king left, the thirty queens were lying on a rocky plateau at the top of the waterfall, waiting for the angel to arrive.

Then the distant angel caught the eyes of the queens but he brought the black flag to mark the defeat. It is said that the thirty queens who saw it jumped down from the waterfall and committed suicide. Later, the king came to see his queens in triumphant style and saw the destruction that had taken place. According to legend, the king jumped from the waterfall and committed suicide while in shock. Kings Horse Jumping Falls is said to have been later renamed Asupini Falls.

The place where the bodies of dead queens were found in ancient times is today known as Minikandawala. To this day, the bodies of people who fell into the water at the top of the waterfall remain here. There is another legend about the tomb. That’s about half the gold here.

The water in the tombs was black. There is a belief among the villagers that there is a gold mine associated with it. According to their beliefs, Ada rises from the water only occasionally. Then a vibrating sound is said to rise through the waterfall. The villagers believe that the noise is made when a man is about to be killed. True or false, Asupini Falls has claimed a large number of lives today.

The current legend of a treasure

There is another interesting story in folklore about Asupini Falls. According to legend, a king lived with his priest in a cave near this waterfall to escape the enemy’s trouble. According to legend, the king who lived there had a bed of gold and seven pots of gold. It is believed that the king later left the place and became a treasure. Some villagers believe the treasure still exists. It is often speculated that the king involved in this incident was Walagamba. The reason was that the king was hiding near the Aranayaka area.